Guardians of the Galaxy was successful beyond anything even Marvel head Kevin Feige imagined.What director, James Gunn, accomplished with the film was outstanding and thus, Feige immediately ensured that Gunn would return for the sequel. Anticipation for the sequel was sky-high, with many fearing that it would not be able to live up to expectations.

Guardians of the Galaxy Vol. 2 continues the story of Peter Quill (Chris Pratt), who finally meets his father but realises that he may be hiding something.

What made the first film such a hit was that it fully embraced the wacky nature of the characters and put an emphasis on fun. Naturally, the sequel continues this style whilst also telling a more mature story. Right from the opening scene, featuring a brilliant tracking shot of Baby Groot dancing to Mr. Blue Sky as the rest of the Guardians take on an impressive GCI creature. This sequence, whilst thoroughly entertaining, has been criticised for being too self-indulgent, apparently desperate to better the iconic dancing Groot mid-credits scene from the first film. However, the sequence works perfectly to reinforce the tone that the audience can expect whilst also firmly establishing the Guardians’ personalities as they each react differently to the situation at hand.

Guardians of the Galaxy Vol. 2 has superb visuals that truly showcase the sense of epic grandeur that the cosmic side of the Marvel Cinematic Universe (MCU) presents. The film is stunningly beautiful and features several of my favourite shots within the MCU. The characters of Rocket (Bradley Cooper) and Baby Groot (Vin Diesel) look exceptional, although nowhere near the magnificent quality of the recent Planet of the Apes trilogy.

The cast remains the most entertaining ensemble of the MCU. Chris Pratt continues to prove that Gunn and Marvel landed the perfect actor to portray their charming hero, despite the initial fan concerns over Pratt’s casting back in 2013. Pratt has fantastic chemistry with Zoe Saldana, as the relationship between Quill and Gamora resembles something out of a sitcom, with Cheers getting a great reference itself. Dave Bautista was the surprise package of the first film, crafting the character of Drax to be a complex but lovable family man overwrought with anger. His delivery of comedic lines proved to be very effective and, therefore, he is promoted to the primary source of comedy in Vol. 2. The rest of the cast all get moments to shine, however, the real standout of Vol. 2 is Michael Rooker as Yondu. Rooker’s role in the first film was disappointingly small but regardless the character proved to be a fan favourite and as a result, James Gunn gifted Rooker with a much more significant role in the sequel. Yondu is very much the heart and soul of Vol. 2, serving as the emotional core of the film. Rooker’s performance in Vol. 2 remains one of the standout performances among the supporting players of the MCU. Another character that receives a more significant role is Kraglin played by James Gunn’s brother, Sean (who also does the motion capture for Rocket). In the first film, Kraglin was nothing more than Yondu’s sidekick, however, the sequel further explores their relationship, showcasing that whilst Yondu is Peter’s surrogate father, Kraglin and Yondu are like brothers.

Among the newer cast, there are two standout performances from Pom Klementieff as Mantis and Kurt Russel as Ego. Mantis’ interactions with Drax are utilised as the primary source of comic relief, and Klementieff blends in with the rest of the Guardians with ease. The casting of Kurt Russel as Ego, brought cries of joy for almost everyone, regardless of whether or not they were fans of the comics. He is easily one of the best villains of the MCU, largely thanks to Russel’s fun performance. The revelation that Ego is Peter’s father should have been saved for the film, but unfortunately, Marvel revealed this during Russel’s casting announcement.

A common criticism of the MCU is that deaths seemingly never stuck. There was always a loophole that allowed the character to be resurrected. It happened with Coulson (Clark Cregg). It happened with Pepper Potts (Gwyneth Paltrow). It happened with Nick Fury (Samuel L. Jackson). It has happened so often that death has lost all emotional impact…or so we thought. Guardians of the Galaxy Vol. 2 has without a doubt the most heartbreaking death in the MCU, even if that’s not saying much. The death of Yondu brings a real sense of poignancy to a film that constantly feels like a film where the characters are never really in any danger. It’s a deeply emotional end for a brilliant character and Michael Rooker is a presence that the MCU will really miss, provided he stays dead of course.

Romance is another factor where the MCU is often considered to be failing at. However, the relationship between Quill and Gamora continues to be a tender, often beautiful romance that remains unique as, despite being two films in, the pair are yet to act on their feelings. Their relationship feels real because both films take the time to explore their characters and let the relationship blossom naturally, instead of forcing the duo together and expecting the audience to believe in their relationship. 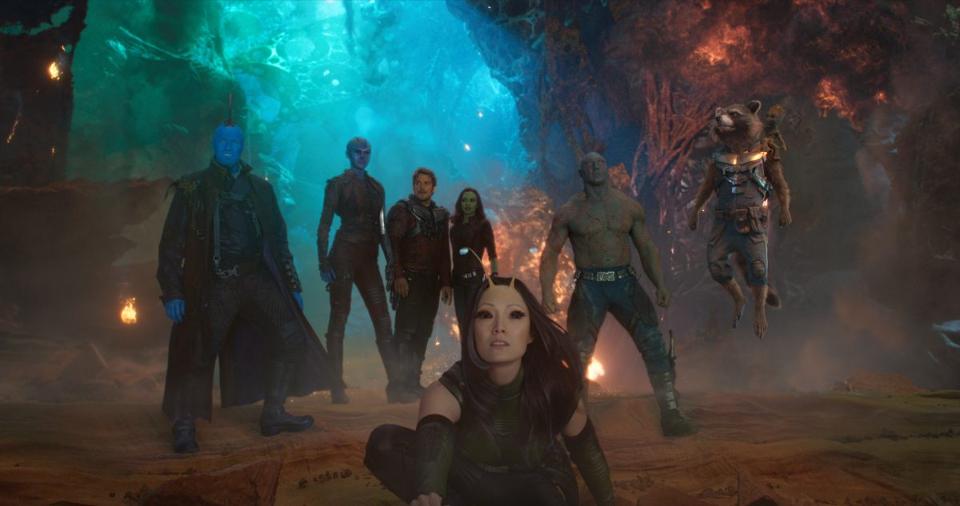 That being said, the film has a major issue with its secondary villains: the Sovereign. They are simply, too cheesy and despite the wacky nature of the film, feel totally out-of-place in Vol. 2. They offer nothing to the overall plot and instead end up being a distraction more than anything. This wouldn’t be a major problem if the film didn’t feature them as much as it does.

Guardians of the Galaxy Vol. 2 is extremely limited in its scope. It makes sense that this decision was made, considering the personal nature of the film, however, the overall structure of the film feels wrong. The pacing is all over the place and often makes it hard to be invested in the overall narrative.

The first film managed to not only top box office sales, but also the music sales thanks to its incredible soundtrack. Unfortunately, while the soundtrack of Vol. 2 is good, it is totally unmemorable compared to the first’s. Some of the songs feel a little on the nose in terms of their placement in the film.

In the end, Guardians of the Galaxy Vol. 2 is an extremely fun but an ultimately subpar sequel that despite offering interesting new characters, is a little too self-indulgent, with many of its standout moments feeling like sequences out of a “greatest hits” showreel.