Quite possibly the most ambitious film ever created, Avengers: Infinity War had expectations that were seemingly insurmountable. A film which, ten years ago, audiences never expected to see. Following the glowing receptions to Captain America: The Winter Soldier and Captain America: Civil War, it’s no surprise that Marvel trusted the Russo brothers to helm the film, replacing the departing Joss Whedon.

Avengers: Infinity War tells the story of Thanos’ (Josh Brolin) quest to wipe out half of the universe. However, he finds himself challenged by those that refuse to bow down and accept their fate.

The film has a story of gargantuan nature. This should come as no surprise considering that there are 18 films prior to Infinity War that in some way or another, set up this film. The film feels epic in scope as Thanos genuinely presents a threat to the entire universe. Similar to other Marvel Cinematic Universe (MCU) films like Guardians of the Galaxy, Avengers: Infinity War tells a story that spans the entire franchise, meaning that the narrative takes the characters to places already familiar to audiences whilst also introducing new locales. Despite already being 18 films in, the MCU continues to expand and the worldbuilding in Infinity War is as good as it has ever been.

There was a lot of excitement and nervousness with the sheer number of major characters that were going to appear in the film. Although the film can feel overpopulated at times, seeing the characters interact, some for the first time, is a sight to behold. There is an especially hilarious interaction between Thor (Chris Hemsworth) and Peter Quill/Star-Lord (Chris Pratt). It’s not a major interaction that affects the plot in any significant way, however, it does a brilliant job of establishing the character dynamics and sets the stage for what ends up being a side-splitting running gag. Although the cast is overfilled, and some characters have bare minimum roles, everyone gets a chance to have their own individual standout moment. Out of all the heroes, the Guardians are easily the highlights, with a smart sense of humour and surprisingly, act as the core of the emotional weight in the film. Nonetheless, although this film is called Avengers: Infinity War, this is Thanos’ film. He is the main character and an extraordinary one at that. Right from the opening five minutes, he makes his presences known as a real and terrifying threat to the universe in a tense opening scene. What makes Thanos an extraordinary character is that his motivations are rational. His plan to wipe out half of the universe actually makes sense. Not only that but he too has a great deal of emotional baggage that sets him apart from the majority of other MCU villains, and cinematic comic book villains in general. I was particularly worried about the fact that he is a completely CGI creation. We’ve seen villains like this in the past that look terrible (*cough* Doomsday in Batman v Superman *cough*). Thankfully, he looks amazing, as he should for a film with a budget somewhere between $300-400 million and Josh Brolin is perfectly cast as the ‘Mad Titan’, in a role he was seemingly born to play. 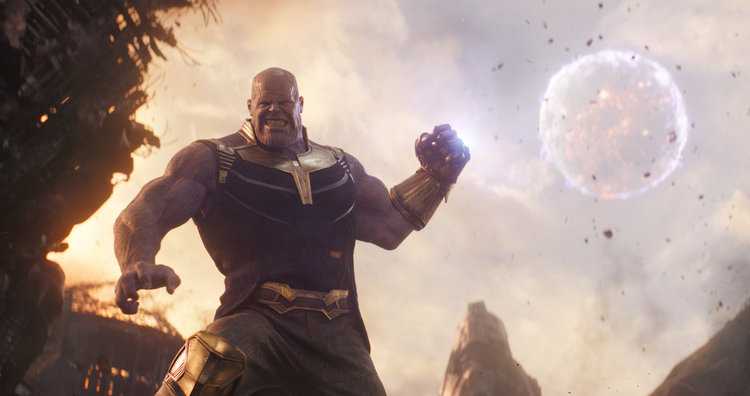 Another concern that many fans had was regarding the humour and just how much would feature in the film. The Russo brothers adopted the same approach that they made towards Civil War, with humour that is mostly subtle (except with the Guardians) and not overshadowing the gravitas of the situation at hand. There are times, when the jokes do feel totally out-of-place, considering the events that unfold throughout the film. However, for the most part, Avengers: Infinity War successfully continues the grand tradition of Marvel comedy, whilst also focusing on the dramatic, emotional aspects of the narrative.

There are several new additions to the MCU in Infinity War, but none make such an impression as the Black Order. It’s very rare for secondary villains to make much of an impression on the audience but Thanos’ children, the Black Order, especially Ebony Maw (Tom Vaughan-Lawlor) do just that. Creepy and powerful, Ebony Maw has such an intimidating presence that I’m a little disappointed that he wasn’t the main villain in another film. The rest of the Black Order are more mixed, although impressive in design, they offer little more than punching bags for the heroes. That being said, they are involved in a particularly excellent action sequence set in Edinburgh which actually serves as their main introduction. I just need to say how bizarre it is seeing several of the Avengers running around Waverley Station considering I’m there almost every week. The Black Order was a good addition although it’s just unfortunate that they weren’t used more and that the most interesting of them all had the least screentime.

The MCU has been very much a mixed bag in terms of visual effects, with The Avengers often looking like an expensive TV production. That is not a problem that Infinity War faces as the visual effects are among the best of the MCU, with its CGI creations including the characters Thanos and the Black Order, and exceptional fully CG locations. There are a couple of moments, most notably during the battle of Wakanda, that has been heavily featured in the trailers, where the CGI is very noticeable. However, these moments are minuscule and do not distract from the brilliance of the rest of the visual effects.

As I mentioned earlier, there is a real sense of emotional weight to the film. By the end, you really do feel that nothing will ever be the same for the characters or the universe. We have spent, in some cases, a decade with these characters on our screens and whenever a beloved character is in pearl, the audience feel the dread hit them like a hurricane as there is a real sense of danger in the film thanks to the fantastic opening five minutes. As the film played out, I found myself becoming emotionally invested in Thanos, as he is so expertly written to be a complex, thought-provoking character.

One thing that the film excels at is surprises. There are so many surprises in this film which of course I won’t spoil. I will say one surprise, in particular, made me jump in my seat with excitement and left my jaw on the floor. 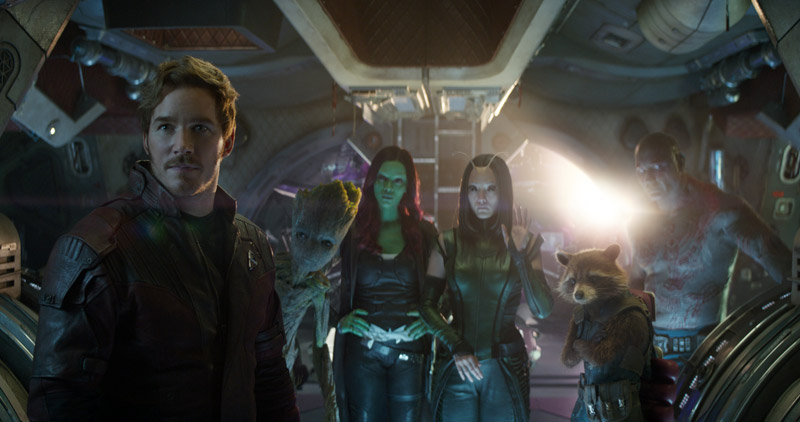 As expected, having seen The Winter Soldier and Civil War, the Russo brothers craft more enthralling action set pieces. There are several great moments of action spread throughout the entire film but none are as epic or impressive as the final thirty minutes. It’s so frustrating trying to write about it without spoiling it so I’m just going to say that the final thirty minutes alone are worth going to see Infinity War for. I’m also just going to say that the ending is the greatest ending to a comic book film ever. Quite simply incredible.

So although there are a lot of positives with Infinity War, it is not a perfect film. The cast is far too big and there is far too much going on at the same time. The film tries to balance all of the storylines that unfold, repeatedly switching between them but as there are so many, it often means that by the time we return to certain ones, a reminder of what was happening is actually needed. It becomes a chore to remember everything that is happening and the characters that are involved. One particular storyline that I hated was Thor’s. He ventures off on his own task and every single time it cut back to his storyline, I internally groaned as it was vastly inferior to the other storylines. There was some confusion over whether or not Peter Dinklage was a part of the cast, however, his role was eventually confirmed by one of the posters. Again, I won’t spoil it, but he is involved with Thor’s storyline and it was a role that really could have been done by anyone.

Furthermore, as there are so many characters, it’s not surprising that there is very little character development for anyone other than Thanos. After all, this is his film and he does have the most screentime. The film is relentlessly paced (which is certainly not a bad thing), but it does often leave the characters in its wake. The film initially sets up potential developments, but more often than not, never follows through on them.

Lastly, although the battle of Wakanda is excellent, it is just the heroes fighting another CGI army. As a result of this, it is often videogame-esque in its design. It is blatantly apparent at times that the actors are punching at nothing, which is, of course, frustrating.

In the end, Avengers: Infinity War is a thoroughly entertaining, though not perfect film that succeeds despite all the odds against it.

(Also just a heads up. Stay until the very end as mirroring Iron Man, there is a post-credits scene that teases the future of the MCU)