The Jurassic franchise is currently in a situation that many franchises experience at their fifth entry. Those in charge need to ask themselves a question: “What must we do now to keep the franchise fresh and the audience interested?” The Fast and Furious franchise brought the Dwayne “The Rock” Johnson onboard and he turned the series into a Goliath at the box office. Die Hard decided to introduce John McClane’s son, played by Jai Courtney, as an agent of the CIA, and the results were the exact opposite. Franchises nowadays need to take risks to stay relevant, and unsurprisingly, this wields mixed results. The Jurassic franchise decided to take its major risk in the fourth entry, Jurassic World, by introducing the concept of hybrid dinosaurs. The idea is interesting as well as being a bit absurd, but what made it successful is that the film acknowledges this. The characters repeatedly make jokes about having to constantly add more ‘wow-factor’ to please the customers, which is, of course, a reference to the film industry having to constantly evolve to keep up with its ever-changing audience. Although I had my issues with Jurassic World (basically anything to do with Vincent D’Onofrio’s character), I liked it for what it was: a studio film desperate to reignite the love for a franchise that hadn’t released a film in 14 years. So as someone who liked Jurassic World and as someone who has always had a fondness for the franchise, I was optimistic about the sequel to Colin Trevorrow’s 2015 film.

Jurassic World: Fallen Kingdom takes place three years after the events of Jurassic World. The park has since been abandoned, however, after the discovery that the volcano on the island is preparing to erupt, a team return to Isla Nublar to save as many dinosaurs as they can.

Firstly, the best aspect of the film is the chemistry between Chris Pratt and Bryce Dallas Howard as Owen Grady and Claire Dearing respectively. The pair has a great onscreen relationship that is a pure joy to watch. Fallen Kingdom advances their relationship by adding drama to their dynamic as the pair have both dated and separated since the events of Jurassic World. As a result, there is a fun romantic and sexual tension between the pair that adds plenty of humour to a rather darker entry into the Jurassic franchise. The relationship is believable largely due to the charismatic performances of both Pratt and Howard. It is hard to picture the film being as enjoyable to watch with other actors in the roles.

In the lead-up to release, director J.A Bayona (The Impossible, A Monster Calls) emphasised that the film was heavily influenced by the horror genre, a genre that Bayona has experience in with his Spanish language film The Orphanage (Originally titled, El Orfanato). The film has some exceptional horror imagery, clearly inspired by the classics of the genre, that are utilised superbly by Bayona who crafts some genuinely terrifying scares. The horror aspect of the film is most prominent during the second half of the film, once the narrative takes the action away from Isla Nublar and into the confines of a mansion. Once inside the mansion, the film has clear parallels to classic haunted house films, easily making it the scariest Jurassic film yet. 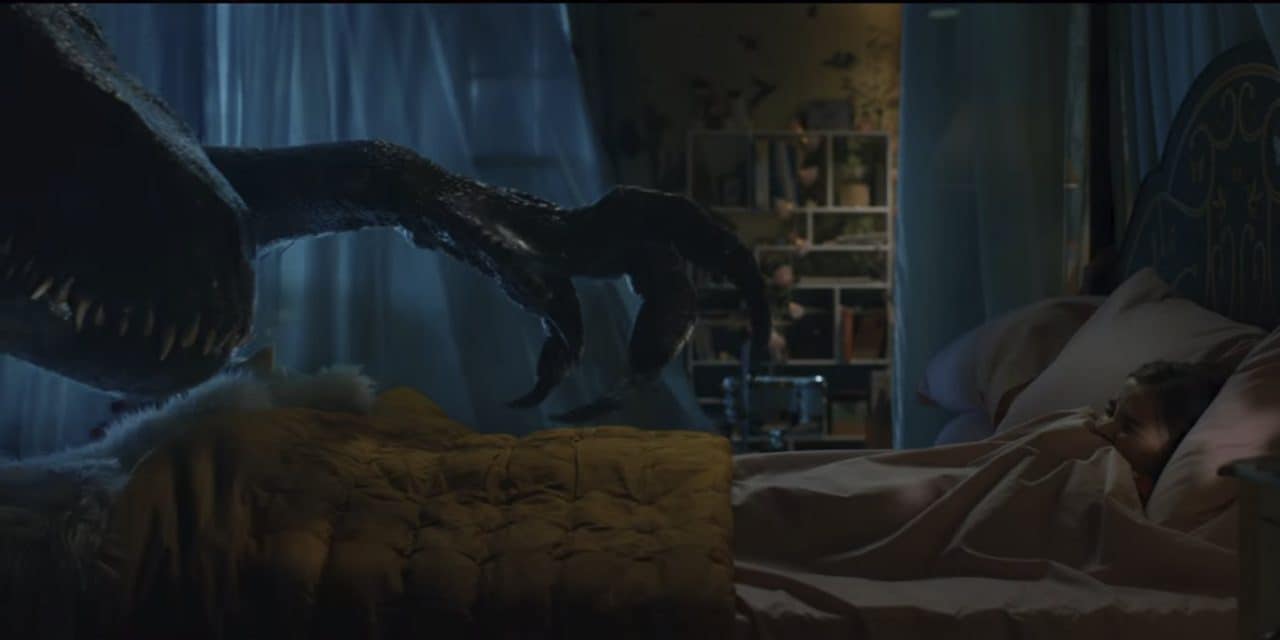 Traditionally, children have been the most irritating aspects of the films, however, that is not the case with Fallen Kingdom. The film features a genuinely compelling subplot revolving around Maisie Lockwood (Isabella Sermon), the grand-daughter of Benjamin Lockwood (James Cromwell), former partner of Jurassic Park founder John Hammond (Richard Attenborough). Maisie is an entertaining character to watch, who doesn’t irritate even once. However, there is a twist involving Maisie which I have very mixed feelings on. Its something that some fans will love and others will absolutely hate. Regardless, newcomer Isabella Sermon has a bright future ahead if she so chooses to continue her acting career as she not only holds her own against Hollywood A-listers but actually outshines them repeatedly.

A criticism that many had about Jurassic World was the inconsistent visual effects. Thankfully, the visual effects in Fallen Kingdom are consistently impressive. Some may argue that the practical effects from the original film still hold up exceptionally well, which they do, but the CGI in Fallen Kingdom is so good that you often forget you’re watching computer created creatures.

Nowadays, Michael Giacchino appears to be Hollywood’s “go-to-guy” for memorable, high-quality scores. His work perfectly feels at home in the franchise, echoing the darker tone that director J.A Bayona was going for. His score may not be as memorable as the one he composed for Jurassic World but it does the great John Williams proud.

During the marketing, the standout moment used to build hype for the film was the volcanic eruption sequence. The time the film spends on Isla Nublar is disappointingly brief, however, remains the most entertaining part. As the narrative returns the characters to Isla Nublar, the film manages to emphasise a sense of nostalgia, not just for the previous film, but also the original 1993 Spielberg-directed classic. The eruption sequence is thoroughly entertaining from start to finish, with the reunion between Owen and his velociraptor friend Blue being a highlight of the film. Fallen Kingdom has a serious underlying message about animal rights, and it’s given serious attention during the events on Isla Nublar, as the volcano erupts, the characters are forced to watch helplessly as many Dinosaurs meet their tragic end. It is easily one of the most heartbreaking moments of the entire franchise, and the film is visually stunning during the sequence. Although the film has several standout moments, none are as memorable as the volcanic eruption sequence. It is simply a fantastic piece of thrilling entertainment. However, it does have flaws which I’ll get in to later.

A final positive is Daniella Pineda’s character, Zia Rodriguez. Sarcastic and sassy, she is one of only two interesting new human characters to grace the screen in Fallen Kingdom. She doesn’t have that much to do, but whenever she appears on-screen, she is a delight to watch.

Now on to the negatives, and there are so many that I won’t get into every single one here. Firstly, in typical Jurassic fashion, the humans are idiots. However, Fallen Kingdom takes this tradition and amplifies it to frankly absurd levels. Characters act in ways that no sane person ever would, and it becomes such a frustrating viewing experience that I was repeatedly hoping for characters to be devoured. The script, written by Colin Trevorrow and Derek Connolly, is really poor, and at times, laughable. There is literally a moment where Claire performs a blood transfusion on a T-Rex because she attended a blood drive once. Somehow, that gives her the knowledge to carry out the transfusion on a prehistoric animal. It’s so mind-numbingly stupid.

Although I had mixed feelings regarding the introduction of hybrid dinosaurs in Jurassic World, the Indominus Rex was a terrifying presence throughout the film. The same cannot be said for the hybrid creation in Fallen Kingdom, the Indoraptor. That could be because it doesn’t actually appear until halfway through the film. However, when it finally does show up, it pales in comparison with the Indominus Rex. It’s repeatedly labelled as the “most dangerous creature to ever walk the Earth” but the film fails to justify this labelling. The Indominus Rex was capable of camouflage and out-smarting humans, meanwhile, the Indoraptor simply looks scary.

Returning to the flaws I had with the volcano sequence, it like the vast majority of the script, is mind-numbingly stupid. I was worried about the sequence, after watching the trailer, where we saw Owen trying to outrun a pyroclastic flow. As it turns out, he does, and I burst out laughing while watching it unfold. Prior to that scene, Owen faces further danger from lava, whilst partly paralysed. He does a little dance on the ground and escapes from it. Once again, I burst out laughing. It’s a desperate attempt at humour but ends up being too funny for its own good, and totally compromises the darker tone that Bayona was aiming for.

The Jurassic films have had serious problems with its human characters since the original film. As such, the audience tends to care more about the dinosaurs than they do about the humans. One of the highlights of the previous Jurassic films were the highly entertaining and over-the-top human deaths, emphasising how little the audience care about the humans. Unfortunately, there are actually surprisingly few human deaths in the film, and therefore, Fallen Kingdom lacks one of the main draws of the franchise. Furthering the topic of poor characters, two new additions portrayed by Rafe Spall and Toby Jones come across as nothing more than cartoon corporate villains. They would be more suited in a Nickelodeon cartoon than in a Hollywood blockbuster. Additionally, whilst Pratt’s character Owen is a lot of fun, Fallen Kingdom turns him into a full-blown superhero. At several points in the film, he seemingly takes on an entire squadron of soldiers single-handedly. Owen was set up as a badass in Jurassic World, but Fallen Kingdom turns him into a full-blown superhero and it is as unbelievable as him outrunning a pyroclastic flow. 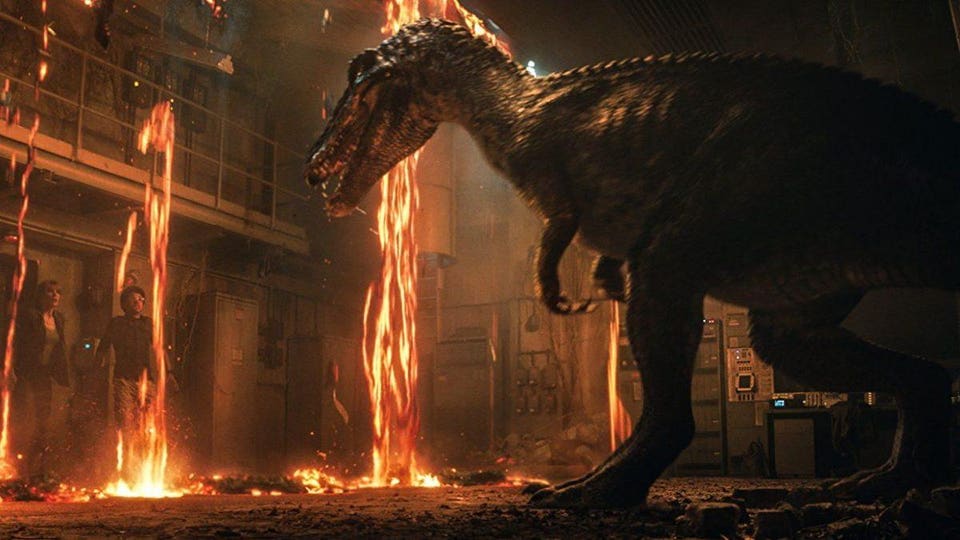 Out of all the details that built hype for Fallen Kingdom, none were as significant as the news that franchise veteran Jeff Goldblum would be reprising his role as Dr Ian Malcolm. Granted, very few people expected him to have a major role, but very few will expect him to have as small a role as he ends up with. Considering the fact that Goldblum has been a significant factor of Fallen Kingdom‘s press events, it is so heartbreakingly disappointing that he has what is essentially a one-minute cameo, that both opens and closes the film. Stan Lee tends to get more screentime in his Marvel cameos, than what Jeff Goldblum has with his “supporting role”. Out of all the disappointments with Fallen Kingdom, this was the most devastating.

Another new character that steals the show for all the wrong reasons is Franklin, portrayed by Justice Smith. Easily the most insufferable character in the film, he spends every second of his screentime whining and telling everyone how scared he is. He becomes such a nuisance that you are actually hoping that despite not being a villain, he suffers a horrific death. He may not be the most annoying character in the franchise, (that is still Téa Leoni’s Amanda Kirby from Jurassic Park III), but he is definitely a close runner-up.

Lastly, the ending is Jurassic Park III all over again. The ending of Jurassic Park III is so despised that Jurassic World opted to ignore it completely. So I was blindsided by the decision to end Fallen Kingdom in such a similar way that it did nothing but infuriate me. If the introduction of hybrid dinosaurs wasn’t a good enough clue that the Jurassic franchise is officially out of ideas, then the ending definitely is. Also, there is a post-credits scene but it is absolutely worthless. All it does is reinforce the ending. The credits last roughly six or seven minutes, and then a twenty-second clip occurs which adds nothing new to the film. I just recommend that you wait for the film to be released on Blu-ray then you can fast forward to it. It really is that worthless.

In the end, Jurassic World: Fallen Kingdom is a fun but ultimately forgettable entry which adds nothing new to the franchise. It instead chooses to rely on the “greatest hits” of the previous films, and unfortunately, the nostalgia only does so much. It may not be the worst film in the franchise, but it is certainly the dumbest.